Food, lifestyle and interiors are often beautifully entwined with fashion.  Often the link may not be initially obvious, but the association is realised very quickly. A recent promotional image of Cornwall-based celebrity chef Rick Stein is a case in point.
It stirred not only fond memories but also culinary interest on my part and a longing sense of travel to hot exotic climes.  In a publicity photo, Stein (currently promoting his new travel-cum-cuisine book From Venice to Istanbul (BBC Books) that accompanies his new cookery TV programme of the same name)  is wearing a washed denim shirt and jeans against a backdrop of exotic wall tiles that one often associates with Mediterranean, South European and North African cultures. 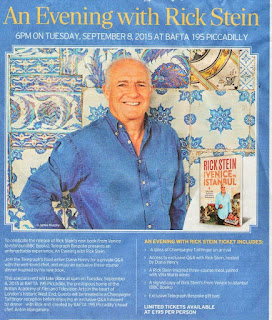 The association forms an alluring yet relaxed picture of well pulled-together styling.
If you want to follow Rick Stein's gastronomic journey From Venice to Istanbul through countries of the former Byzantium empire, you can watch it on BBC2 this month on Fridays at 9:30 pm.  You can catch the programmes you've missed on-demand on iPlayer.

In my visits, though limited, to a number of European, Mediterranean and North African destinations over the years, I have often admired the profusion of colour and creative designs on ceramic wall, pavement and floor tiles that demonstrate the unique patterns of each culture which in turn go on to influence modern designers.
Attending the Pure London trade fair held a couple of weeks' ago at Kensington Olympia, I met two Portuguese designers who both talked passionately about inspiration from Portuguese tiles that formed the basis of their footwear and bag designs.
For one, Marita Moreno showcased her new Sculpture line of shoes and bags handcrafted in white linen and contrasting leather embossed with mosaic designs that can be defined as those of typical Portuguese pavement tiling, known as Calçada Portuguesa. 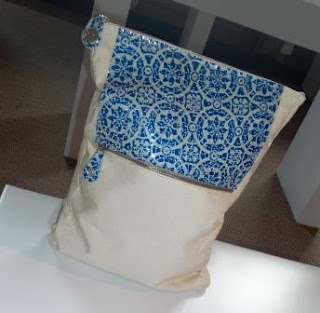 According to lisbonlux.com, the Portuguese capital Lisbon's ubiquitous cobblestone designs were first introduced in the 18th century, during the rebuilding of the city after the 1755 earthquake. "The apparent inspiration was Roman mosaics, and it was an ingenious way to reuse the earthquake rubble. Lisbon was therefore covered in small limestone and basalt pieces, creating black and white patterns without the use of cement." 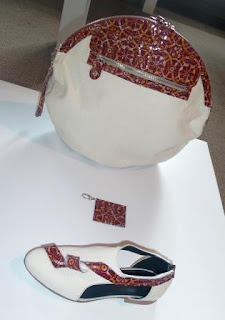 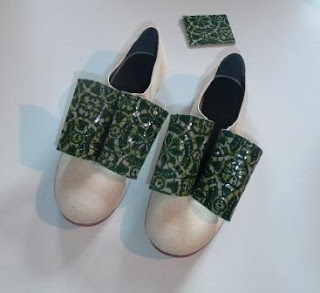 Marita Moreno, featured in the new Premium Footwear section at Pure London, designer of her own eponymous  brand uses Portuguese craft production component for her contemporary designs.
Moreno's unique and distinctive ranges are produced in small quantities and she takes pride in using mainly natural materials in her designs, from wool and leather to cotton, silk and cork, all enhanced by Portuguese craftsmanship.
Another new Portuguese shoe brand is 7hills which features motifs taken from Portuguese ceramic tiles. The designs also feature influences from dancing shoes such as little ballerina bows and satin ribbons as shoe laces. 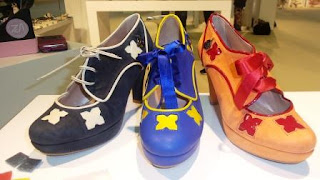 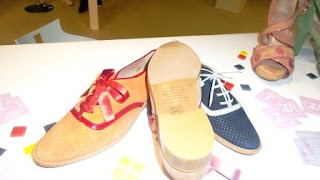 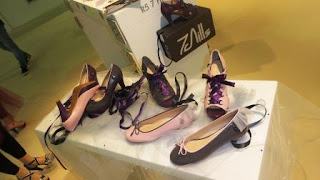 The brand's first capsule collection is called “Shall we dance?”, in leather of grey, pink and burgundy.  A couple of ballerina slippers even feature tulle netting at the back like a ballerina's tutu skirt.
All pictures by Lucia Carpio for My Fashion Connect.
Posted by myfashionconnect at 04:27

There is no doubt that the Covid-19 outbreak has caused massive disruption to the global economy, and will continue to pose unprecedented ch... 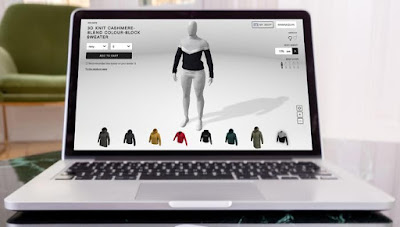